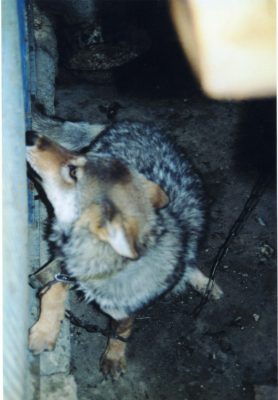 Wolves are regarded as special due to their double role of being both predator and prey. So while one part of the wolves‘ life is governed by their own hunting activities, the other part is governed by the continuous need to hide from humans. Accordingly, wolves are said to hide and sleep by day and to hunt by night, which is diametrically opposed to what humans do.

Currently, hunts on wolves are not very common. According to Pratt, Macmillan and Gordon (2004), wolves were heavily hunted by organised groups up to the 1990s. In communist times, a hunter received 50 Tugrik and a sheep as payment for killing a wolf. At the same time a new metaphor concerning wolves was introduced in the Soviet Union which was also brought to Mongolia in the 1940s when the country was plagued by rabies. As Chinagii Galsan writes in his autobiography, Soviet vets came to Mongolia giving pastoralists poison to kill rabid wolves. These vets said that they will triumph over the wolves like they had triumphed over German fascism (Schenk and Tschinag, 1999, p.167). Today, pastoralists consider the number of wolves are increasing, but since the turn to democracy at the beginning of the 1990s, organised wolf hunts are very rare. The state administration still pays for every kill, but I have not met a single hunter who has ever claimed such payment. ‚Too bureaucratic‘, one hunter said to me, or they simply did not know about any bounties. Moreover, in contrast to snow leopards or bears, wolves have a low market value and are therefore not profitable to hunt (Pratt, Macmillan and Gordon, 2004, p.602). This corresponds to my informants‘ comments on the lesser aesthetical value of wolf furs.

Nevertheless, the Tuva have two traditional wolf hunting days in a year. The first day is in spring, shortly after cubs are born. Older wolves are killed and one or more cubs are occasionally raised at home until autumn (see photo above). Then the cubs are killed and their body parts are sold or given to friends and relatives as talismans or medicines. The second hunting day is in autumn, soon after the first snow has fallen and tracks are easy to find, identify and follow. Apart from these two days, wolves are hunted whenever they have attacked a pastoralist’s animals.

Hunting wolves demands skilled hunters. In particular, they have to be more intelligent and more favoured by the gods than wolves are. As wolves are highly respected for their cunning, intelligence and bravery (which often surpasses human capabilities), only the best hunters are deemed worthy of killing a wolf by the gods and the wolves themselves. This worthiness must be demonstrated in hunting. The hunter has to proof his skills against the wolf in a real, risky situation.

It is no surprise to see that hunters have a considerable amount of respect for, or even fear of, their prey. I met a young pastoralist who had shot his first (and last) wolf several years ago. He and some older hunters had found a den where a she-wolf and her cubs were hiding from them. The older hunters told him to enter the den and shoot the wolves, but the young man was afraid to go into the dark den. After a few minutes of teasing, he decided to do it, crawled into the dark and shot the she-wolf and all her cubs. He has never seen a wolf ever since. The reason for this is that he broke one of the hunting rules, which is punished by the gods with certain consequences. Those who kill a she-wolf and all her cubs will never again see a wolf in their whole life. The rule says that you should leave at least one cub alive so that the rest of the pack has a cub to care for and thus do not take revenge. As exemplified in the account above, hunting rules are not just abstract knowledge or ethical guidelines. All rules are proved by concrete examples showing the negative consequences of breaking them.

However, there is more to hunting than rules, contests and risky situations. Interestingly, I found not just the most respect for wolves but also the greatest admiration for them among wolf hunters. One hunter even told me that you have to love wolves in order to kill them. This love is unlike children’s love of wolves for bringing luck to those who see them. A hunter’s love springs more from the sense of an intimate relationship with wolves and knowledge of one another. A retired hunter reported that he quit hunting after many years as he had dreamt of wolves very often. They promised to make him rich if he stopped hunting. His admiration and love for wolves, which had developed through all the years of hunting, finally became so strong that he could not kill them anymore.