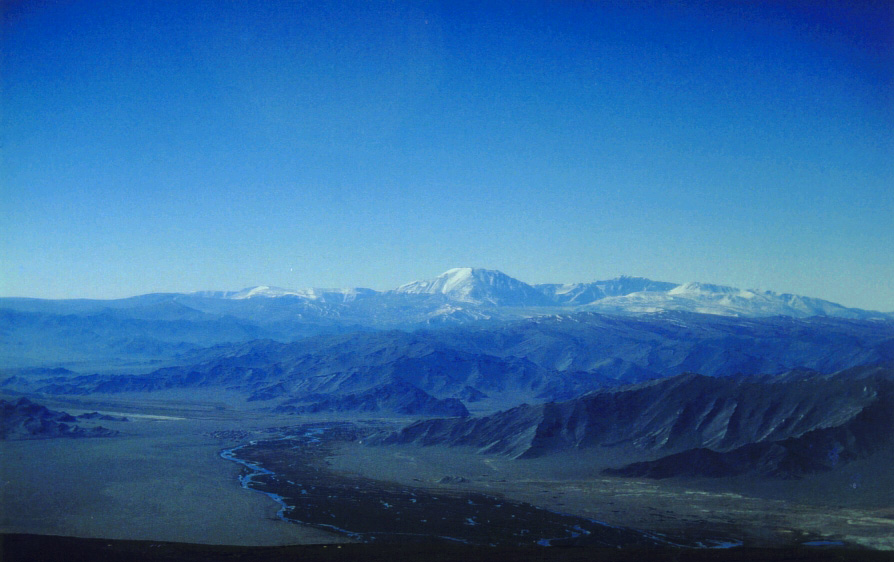 After a consultation with the spirits of a local ovoo (sacred place), a shamaness told Cheme, one of Galtai’s brothers who accompanied us, to get a wolf’s knee joint which he should bind to his car keys. Cheme had had a serious accident some months before I arrived and he was nervous about driving. With the help of the knee joint, so the shamaness told us, he could prevent further accidents. As Cheme was quite skinny, the shamaness also advised him and another relative who had a severe illness and therefore had lost much weight, to eat powdered wolf’s stomach to help them gain some weight.

This little episode shows a different side of wolves. Wolves are regarded as ‚heavenly‘ creatures who should be respected because of their close relationship with Tenger, the God of Heaven. This relationship is expressed in the wolf’s pseudonym tengeriinokoi (mong. Dog of Heaven), which marks the wolf as being ’special‘, dangerous and benevolent at the same time. A wolf killing sheep is as tengerleg (‚heavenly‘) as a wolf nursing a little goat. In general, animals are regarded as being tengerleg when they have an outstanding ability such as strength or speed. Parallel to this term, the word hiimori is used to denote people with exceptional abilities which they are said to have because of being favoured by the gods. This term is usually reserved for humans only, with the exception of wolves. Wolves also have hiimori as they are revered for their strength, intelligence and speed. Consequently, even those who want to just see a wolf have to be favoured by the gods, too. Killing a wolf, as we have seen, demands even more.

Importantly, the wolves‘ status of being tengerleg bears an important consequence which affects the use of names for them and other beings. Among the Tuva and neighbouring pastoralist communities it is believed that one should not speak the name of tengerleg and/or ‚dangerous‘ beings. Mountains in the Altai, for example, are tengerleg and are therefore referred to by a pseudonym. Similarly, a wolf is called dog (mong. nokoi), Grandfather (tuv. eshej), Red Eye (tuv. giizil garag), Wood Tail (tuv. iish gudurug) or Dog of Heaven (mong. tengeriinokoi). The proper Tuva word for wolf, bör, is rarely used as this would ’summon‘ the wolf, and wolves are said to be strengthened every time someone speaks their name. This rule becomes especially important when hunters prepare to go on a wolf hunt. To speak the wolves‘ proper name would warn them as they are said to be able to hear over long distances. Although the same rule applies in principle to the Mongolian word for wolf, chono, I noticed that people use it quite freely. No one could tell me whether this is due to the fact that Mongolian, for many, is their second language after Tuvan.

It is no wonder then that this tengerleg animal is closely associated with shamans. One shaman even called the wolf a ‚four-legged shaman‘ because wolves are able to work themselves up into a state of ‚rage‘ which is equal to shamans working themselves up into a trance. The ‚four-legged shaman‘ features in shamanic practices and beliefs in three different ways. First, shamans utter different sounds at the beginning of some rituals in order to call their spirits. This ’shaman’s call‘ includes different types of ’nature sounds‘ such as the whistling of the wind or the wolf’s howl. This call is the shaman’s way of asking the land for assistance in the ritual. The wolf as a part of the land is therefore included.

Second, the wolf used to serve as a mount for shamans to ride to far away places fast while being in a trance. Today, there are no shamans in the region of Ölgiy and Zengel-Sum who use the wolf in this way. But a great Tuva shamaness, whose daughters I met, used to ride to Ulaan Baatar and other places on a wolf. This image of the wolf as a mount appears also in the iconography of some gods of the old Mongolian pantheon. Güjir Tenger, the god of horned animals, is one of those gods who is described as being like a wolf and having a wolf as a mount. A shamanistic invocation says that he rides on a rabid wolf, preys on humans, prowls like a wolf and kills like a wolf (Tucci and Heissig, 1970, p.362). It is important to note that the mount in the iconography of the gods is not (only) a separate being who is related to the god. The mount seems to be an externalized aspect of the god himself. Güjir Tenger thus is a wolf himself, as is demonstrated by his behaviour. Another god associated with wolves is Begtse, the god of war, who is accompanied by the ‚Red Master of Life‘ or the ‚Atrocious Life-Master‘, riding on a wolf.

Third, the great shamaness mentioned above also used to let wolves bring spirits to her while she was shamanizing. In past times it was even thought possible for some powerful shamans to turn themselves into a wolf. However, the heiress to this shamaness told me that among the Tuva there is no shaman left who is able to do so. Everyone I met, except for one other shamaness, thought it impossible for a human being to shapechange into the shape of another being because “a human being is a human being and an animal is an animal”.