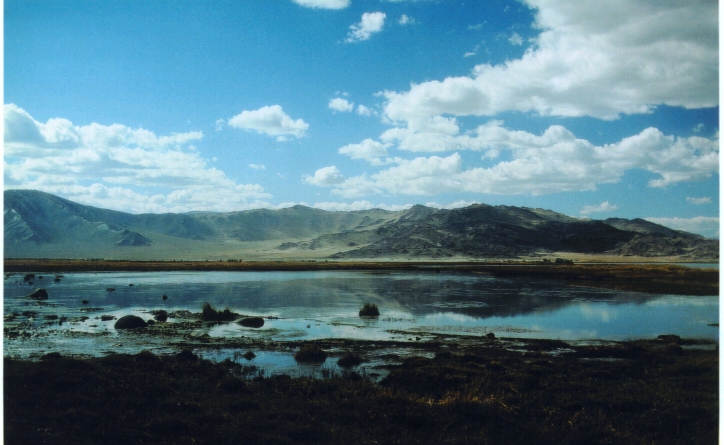 Most Tuva I met drew a clear line between wolves and human beings. Wolves are wild (mong. zerleg), they can do whatever they want and they live in the mountains far away from where humans live. The ‚otherness‘ which is expressed in these comments points to the wolf as the perhaps most typical representative of ‚wilderness‘ (mong. dselüüd gadsar), a concept which needs explanation from a Tuvan perspective.

I therefore begin with an outline of the Tuva shaman’s concept of the world as consisting of ‚circles‘. Within this framework, there are different levels of circles and each circle contains a number of other circles. Starting at the top level, it can be said that the Earth is a circle which consists of many other circles, i.e. the continents. The continents are divided into smaller circles like, for instance, the steppe, the mountains and the desert. Within the circle of the Altai mountains are still smaller circles, the ails. It is possible to describe the whole world as consisting of circles, ranging from macroscopic to microscopic levels, of which I have named a few. When I discussed this issue with my Tuva friend Galtai Galsan, he pointed out a crucial property of a circle, namely that it does not have corners. If yurts were square instead of round there would be corners without any use. In a round yurt there is no useless space. Every place in it has its clearly defined use. The same is true for the whole world. Nowhere does a shaman see useless space. Every being has its places where it is meant to dwell at a specific point of time. It can be followed that places have different kinds of uses for different beings at different points in time. Therefore, pastoralists are meant to move from pasture to pasture according to the rules applicable to them alone. And other rules concerning movement in space apply to other beings, not just human pastoralists.

It follows that, from a human perspective, the world is divided into at least two parts, places for humans and places which are not meant for humans. The one not meant for humans is called wilderness. It is far away from human places and paths, and therefore beyond human control and unknown to a great extent, just like wild animals.

As wolves have their own places and paths it becomes clear why wolf encounters are rare. Wolves live in a totally different habitat than pastoralists. The latter live in the steppe while wolves live in the mountain areas where they are hidden from human sight. But this is not to say that their paths never cross. For wolves live only in different places from humans during the day. At night, hidden by darkness, their paths lead to human communities where they go hunting. Wilderness and wild animals, therefore, are conceived here as dynamic concepts which cannot be reduced to a simple spatial dichotomy of (human) centre and (wild) periphery.

Likewise, the categories of ‚wild‘ and ‚domesticated‘ are as dynamic as the boundaries of the ‚circles‘. Under certain circumstances domestic animals can become wild but wild animals can never become domesticated. Those animals who are wild or have returned to the wild should be left where they are because they cannot be controlled. Even in the case where young wolves are captured in the spring and raised until the autumn, these wolves are not controlled. They are locked up in a cage but the free will of wolves cannot be broken. Correspondingly, dogs who have returned to the wild are shot or left where they are as they can never be re-domesticated and trusted again. Even sheep or goats can return to the wild when they live in the wilderness, i.e. when they are not cared for by human beings.

In view of this, I suggest that for the Tuva their domestic animals are more ‚tended‘ than ‚domesticated‘. They must continuously care for these animals in order to maintain their status as ‚belonging to humans‘. Life, then, for the Tuva, is a continual struggle with wilderness. Their own animals must be cared for so that they do not become wild. And somewhere out there “where human feet do not wander” (Mongolian phrase) are the wild predators, the wolves, who prey on humans‘ animals and humans themselves.