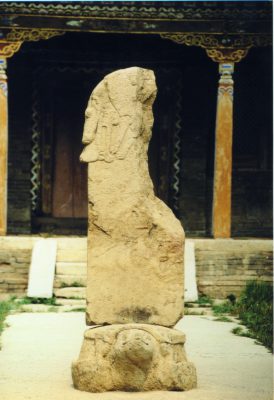 Even though the Tuva eagerly pointed out and stressed a lot of differences between themselves and wolves, I also discovered a sense of ’shared fate‘ regarding wolves. They recognize that wolves‘ seasonal activities, problems and needs are similar to their own and all other animals‘ in the region. Due to the harsh climatic circumstances, all animals have to struggle with similar environmental conditions. As a young woman told me, wolves tend to their offspring like humans do and wolves, like humans, kill and eat sheep and cattle. This sense of living in the same environment and sharing similar foci in life is expressed at least in the Tuvas‘ respect for the wolves who live nearby. These ’neighbours‘ recognize certain rules that non-neighbours do not. For a wolf, it would be unwise to kill animals belonging to a neighbouring pastoralist because pastoralists generally know the dens near their ail. The pack would be hunted down immediately. Therefore, wolves “go over seven mountains (and rivers) to kill” (i.e. one ‚circle‘ away), as “only poorly skilled thieves steal in the neighbourhood” (both Mongolian phrases).

Like human neighbours in the ail, neighbouring wolves engage in reciprocal relationships. On the one hand, for example, wolves are said to protect the herds of their human neighbours from other wolves. On the other hand, wolves in need might find help from their human neighbours, for example when they have a thorn in their paw or a bone stuck in their mouth. The wolf hunter A. told me of an old woman who lived alone and lost all her animals during a long, harsh winter. Then, one night she heard someone shooting outside. As she went out of the yurt she saw a wounded wolf lying nearby. The old woman carried the wolf inside and nursed his wounds. She gave him meat from her dead animals to eat until he finally recovered. Since that time the wolf brought living sheep and goats to the old woman every day. Finally, she became one of the richest nomads of the region. This behaviour was said to be ’noble-minded‘ and similar benevolent behaviour is reported in many stories.

A related occurrence is the nursing of human children or baby animals by neighbouring wolves (as depicted on the photo above). The pastoralist and wolf hunter D. told me about a family who was unable to have children:

Every baby died the day they were born. A shaman told the family to place the next baby in a nearby wolf’s den for five months. The parents did so. The wolves did not harm the baby since they harm no young, be it wolf cubs or human children. The child was raised by the wolves until he was one year old. Then his parents stole him and brought him back to their home. The wolves wanted him back. However, the boy’s parents would not let him go. Being refused their wish, the wolves killed all the family’s horses but finally resigned. No child of this family has ever died at birth since then and their successors are known as the ‚wolf family‘ that lives until today.

From the Tuva’s perspective, this neighbourhood rule –like all the other rules I mentioned before – are known and generally respected by both sides. Wolves know the consequences of breaking the rules and are able to imagine what their human neighbours would do in return. So for the Tuva it is clear that wolves are capable of social interaction with humans. They are capable of ‚taking the role of the other‘ as G.H. Mead would have put it. This is clearly demonstrated in the following account where a Tuva told me of a she-wolf who stole a lamb in her neighbourhood in order to show her cubs how to hunt and kill. She told her young not to injure the lamb. But they played so intensely that they unfortunately killed the lamb. The she-wolf knew that this was a violation of neighbourhood rules and went to another herd far away to steal a lamb that looked like the dead one. She then brought it discreetly into the herd where the other lamb was missing as she knew what would happen if she did not replace the dead lamb.